VJ Isak, also from the same management company SM Entertainment, tweeted about TVXQ’s U-know Yunho’s performance at the ‘A Tribute band from Michael Jackson’s THIS IS IT movie and U-Know Live’.

Today’s performance will be the second day of the 2-day tribute concert that is being held at Yongsan’s War Memorial Hall. 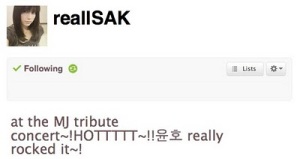 Isak was not only impressed by Yunho, but it turns out that their juniors SHINee and f(x) were there to show their support as well!

This entry was posted in DTL News Preview and tagged MJ concert, Yunho. Bookmark the permalink.