Sunanare Love degree check
-Love that already started, love that might start..we predicted the love with a percentage. Don’t know how it’s going to end yet! – 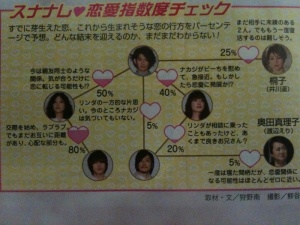 50%
Right now its more of a friend.
They do have things in common so it may turn into love!?

Haru & Doctor
80%
They started dating and are lovey dovey.
But they still have a distance and there are more to worry.

Nakaji & Kiriko
25%
They both have feelings for each other. But it seems to be difficult for them to become a couple again.

Nakaji & Peach
40%
Nakaji comforted Peach and they became closer.
It may turn in to love!?

Peach & Linda
20%
Lina did listen to her problems but its only like a good brother?

Linda & Okuda Mariko
5%
They have slept together but the percentage of them turning into a relationship is close to zero.

Junsu first debuted on the Japanese stage in 2005 as a member of Tohoshinki.
Today was his SOLO debut stage.

Tonight we will release “Intoxication”, a song from “XIAH”!

“XIAH” which is released tonight has 2 versions; CD + DVD version and the CD version!

The song track “Love Letters From 5 Years Later“ will be the CD’s theme.
[The song] is about a “sad fate” and if you want to listen it please purchase the CD version.

Junsu plans to be together with Jejung and Yuchun after this.

Other than this, many back-to-back events have been confirmed.

To the famous “Xiah Junsu” who was this evening’s guest, thanks!

Yoong-su and Hinata’s Tokyo date
Making the under construction of Tokyo Sky Tree as the background and “cheese”. The 2 becomes attracted to each other little by little…but…

Working right now? Yoong-Su who is interested in writer Hinata’s work.
Hinata reveals that her dream is to become a novel writer, and he compares his dream to hers…

A friendship hand shake with Akira!?
“Chingu…friend…” Yoong-su and Akira who shakes their hands. After coming to Japan Yoong-su learns to trust someone!

After coming to Japan, Yoong-su walks around Tokyo as if looking for something. Is there something that has to do with his past…?

Hinata’s boyfriend, an apprentice cameraman Akira!
Usually Akira is a funny character but he holds a camera and with a serious face as if aiming for something…what is ahead of him!?

While drinking alcohol, they are planning something. Hinata and Akira’s secret discussion… What are they trying to do!?

This. If 650 people were all full I’ll die from happiness. I want to go see it. I want to see it at a big place!

Heaven’s postman is all sold out up until 6/3

That name was for ~

The source of the official website of the new unit.

The back side of XIAH Junsu solo CD jacket.

There is the name CJeS, instead of SM.

For your reference, this is the jacket for SHARE THE WORLD