“Thank you everyone for being able to attend this.”

– Then, lets get straight to the topic. Firstly, describe how you felt about the work after reading the script, and what is the charm of the character Cha Bong Gun.

“Okay. The first time I read the script, I felt that the character (Cha Bong Gun) was really an innocent person. Even though it was tough, even though he faced dead-ends, he always overcame these obstacles; he would work hard with all his life, and through his efforts and belief in himself, he grew and matured. I really wanted to play this character because I felt that there was a lot of similarities in our stands.”

– This is a character who faced many different kinds of problems, for example, the disbanding of the soccer team et cetera; do you have any tough past experiences which you can joke about now?

“Experiences as YunHo? Then it should be the times before my debut, when I was still a trainee. I am only where I am today because I kept working hard while maintaining the thought of ‘When will I be able to debut on stage to sing’. It was the toughest during that period. Furthermore, I lived far away, and it took 4 hours just to travel to and fro, so that was also pretty tough. At that time, I had nothing except for belief in myself, and I got to where I am now based on my passion. In that case, I’m not that much different from Cha Bong Gun.”

– Was there anything you did to create the character, or say immerse yourself in the character that you were playing?

“I was once very into soccer players. The filming period was coincidentally during the a-nation activities. I would practice with the ball backstage, and would also practice the way I walked. All these were done according to the style of Bong Gun.”

– Other than this, impromptu singing and dancing with costumes, you have been through many of such elaborate settings, so how did you feel towards acting?

“Through playing Bong Gun’s character, I learnt a lot of new experiences. For example in the scene where I donned on a chicken costume for my job, that is something I don’t usually do. To me, these new experiences are all very precious. To be able to reflect as another person is not just work to me, but it’s closely related to my own life and my growth [as a person].”

MY GOAL IS TO IMPROVE MY STANDARDS IN EVERY OTHER ASPECT, THAT IS THE YUNHO I WANT TO BE.

– We heard there was a huge number of fans who entered the filming scene, and there were a lot of people who acted as the masses.

“Yes, I was very happy. The fans gave me a lot of strength. Also, the staff told me, ‘you really have very good fans’.”

– It is probably very pressurizing debuting in your first drama series; share with us your feelings about being an actor.

“There is definitely some differences between an artiste and an actor. While you work as an actor, there will be many staff on the set whom you are meeting for the first time, so I would want to interact with them as I finish filming episode 1 to episode 16 smoothly. Moreover, this is the first time I am taking the main lead, and although I had gradually developed some acting skills through being in variety programmes in the past, the atmosphere [on the set] is completely different. It was very pressurizing in the beginning. But I thought to myself, if I work hard, then I will be able to express my intentions to everyone. Thus I completed the filming by working very hard, by being very focused, and by enjoying it thoroughly.

An artiste would need to express a lot of things in about three minutes (of the duration of a song). I think an actor needs to do the complete opposite. An actor needs to maintain a rhythm like that of breathing, and through the entire process from the beginning till the end, express happiness and pain. This is what is different from being an artiste.”

– In the process of acting, in which areas do you think you have matured in?

“This time it was the very innocent and pure Bong Gun, who slowly matured through the process of meeting many people. Like I have mentioned before, this part grew along with me as a person and in my own life. I have also experienced many things I have never been through before. The filming might have ended, but Bong Gun still exists in my heart, and if the character of Bong Gun can continue to stay in everyone’s mind as time passes, I would be happy. I also want to work hard to try out other works, something that is a complete 100% change from Bong Gun, and challenge different types of characters.”

– In the future, as both an actor and singer, which will be your focus? Do you have any plans which you intend to carry out?

“Frankly speaking, I have been a singer for 5, 6 years now, and to say ‘I prefer acting’ would be a lie. However, this time I experienced a charm that is different from being an artiste, and I would like to work hard on it properly. Of course not just in being an actor alone, but I would also want to improve my standards in every other aspect, and that is the YunHo I want to be.”

– Although there were many highlights in this drama, do still list out some scenes which one must look out for.

“I would still recommend everyone to focus on the scene where we played soccer. In that scene I did not rely on any stand-ins; basically I did everything myself. I would somewhat like to try out something realistic. That was probably the impression I had. It was a scene where I had to perform a high-level skill, and I repeated the scene till I was able to do it properly.”

– There was also a scene in the drama where you performed “Checkmate”.

– Was this part included in the script initially?

“No, it was not there initially. However, when the director saw the way I danced, he suddenly said to me, ‘That, it’s not bad to do that too.’ (laughs)”

– How did it feel dancing to your own song as your character?

“It was quite embarrassing, to say the truth, but because it was Bong Gun and he needed to sing a new song, so I tried my best to act it out based on that feeling.”

– Performing in a television drama, participating in MJ’s Memorial Concert, you really challenged a lot of things; what other challenges do you have in mind for this year?

– How do you plan to launch your activities from here on?

“I’m still not too clear now. I would probably meet everyone as a singer [still]. After all I am still a singer now (laughs).”

– Lastly, you might feel a bit embarrassed to say this yourself, but what do you think are the charms of YunHo as a solo singer?

“For this, not just as a solo artiste, but it should be in all that I do. Maintaining my passion, working hard, challenging new things, these are probably my charms. But these, like many others, are naturally expected. Every time, every time, [I will aim for] a higher goal, challenge a different image, and continue to work hard. This part is something that I am proud of. I really want to be someone who works hard.” 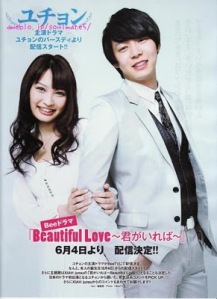 Q: What were your thoughts when you received the offer to star in this Japanese TV drama?
– I have never acted before, plus having to speak in Japanese… Frankly speaking, I was really uneasy.

Q: What left the deepest impression on you during the shooting of this drama?
– I didn’t have enough time to practice as the shooting for the drama took place immediately. Every day after the shooting was done, I would spend countless hours in my room with my manager, going through the script and preparing myself for the next day. There was almost no time to sleep and I often asked myself if I could do this well. Because I felt anxiety and the pressure of doing well, I couldn’t sleep well too. Even though I was forced to eat, I had no appetite, so it was really hard! However, the moment the shooting took place, I enjoyed it. It feels really good to be able to experience a life that’s not my own. Even though the shooting has only taken place for a week, I’ve had a lot of inspirational and moving moments.

Q: You’re playing the character of Youngsu a young man who comes from an extremely wealthy background and displays a strong attitude towards anyone. This is not a very good character trait. Is it very different from your own character?
– Even though Youngsu may seem to be a person who is fulfilled or satisfied in every way, he is actually rather lonely. From a moral point of view, he does not seem to know what is important. Though I am different from Youngsu, I understand how he feels. Just like what Hinata told Youngsu, now that I have a crew who treats me like family and supporters who like me, I feel blessed.

Q: Youngsu changed after meeting Hinata in Japan. What is Yoochun’s one encounter that changed his life?
– There’s a lot; in this drama, I understand now the joys of acting because I was given the chance to know many outstanding actors, actresses, director and crew members. After having been an artiste, I now have the dream to become an actor. This was really a life-changing encounter!

Q: This is your debut in Japan’s acting scene. Would you want to continue acting in the future?
– Definitely! However, my greater wish is to be able to sing as soon as possible.

Q: Finally, please tell us something about this drama that we can look forward to.
– If you are able to understand both Youngsu’s and Hinata’s thoughts and emotions, it will definitely be very interesting! Also, the theme song that is sung by Xiah Junsu is also something to look out for so keep an eye out for it.

I heard that Yoochun is starring in this drama, and because the story plot and content is very good, I will do my best to make the drama more appealing with my song. I have been to the scene of the shoot once, and after seeing how Yoochun and everyone else worked hard in order to produce a perfect piece of work, I also immersed myself in that atmosphere.
[君がいれ ば～Beautiful Love] is a new composition written especially for this drama, so please listen and feel the emotions captured within this song. In order to reciprocate the producer’s expectations towards me, and to match the song composition written for this new drama, I will use my unique way of singing this song.