MR removed video of TVXQ duo performance has been spreading on internet and becomes a hot issue.

Fans who watched the MR removed video commented, “They really have great skill in performing live” “There’s only a little difference than the CD version.” “Both performance and the song itself are excellent” and “What a crazy singing skill”. Netizens raised their thumbs as the duo had excelled a stable vocal regardless their particular hard dance routines at the performance.

Meanwhile, TVXQ had a comeback at MBC ‘Show! Music Core’ on the 8th and will also plan to perform at SBS ‘Inkigayo’ on the 9th.

[NEWS] TVXQ Reflects on First Comeback Stage, Yunho Clarifies His ‘Thanks To’ Message

After pre-recording for their comeback stage on KBS 2TV’s “Music Bank” today, the boys of TVXQ met with reporters to discuss their love for the stage, their ambition for a strong performance, and to clarify the controversial ‘Thanks To’ message.

Starting off, the duo shared, “We’ve wanted to stand on stage for a while. It’s really emotional.” Yunhocontinued, “It feels unique coming to the broadcast hall after such a long time. I’m more excited than nervous about our first stage. Unfortunately, I caught a cold, and wasn’t able to show the best stage possible.”

Changmin added, “While watching the year-end award ceremonies last year, all I could think about was wanting to stand on stage. I thought I’d be nervous, but maybe this is what it feels like to come back home after studying abroad.”

In an interview with Star News, Yunho stated, “It’s been a while since we’ve stood on a Korean stage, so I was very excited, feeling very much like a rookie again. We’ve gotten a lot of juniors here at the broadcast hall, and I felt thankful in being greeted by them. We’ll be promoting ‘Keep Your Head Down‘, and we’ll show a good image to our fellow seniors, juniors, and our fans.”

Regarding the controversy surrounding ‘the second coming of TVXQ‘ statement in his ‘Thanks To’, Yunho clarified, “It’s just an expression of our feelings in starting our activities again as a duo. After a long while, Changmin and I have released an album, the message was just meant to be an expression of greeting our fans again. It’s our new sense of determination.”

When asked about the differences between singing a song with two members as opposed to five, Yunho answered, “First of all, you need more stamina. Changmin took charge of the high notes while I covered the lower notes. I was worried about whether they’d match, but thankfully it harmonizes well. We tried to pay attention to every part of our choreography. It’s an album we’re confident in, as we’ve put our best in it for our fans to look forward to.”

The duo also completed an interview with KBS 2TV’s “Entertainment Relay,” which will broadcast at 9 PM KST on January 8th.

[TRANS] 101112 Kang Seung Yoon Confesses: Watching TVXQ Made Me Want To Be a Singer

Mnet ‘Super Star K2′ contestant Kang Seung Yoon confessed that he wanted to be a singer after watching TVXQ .

In the afternoon on the 10th of November, Kang Seung Yoon appeared on KBS’s Radio 2FM ‘Lee Soo Young’s Music Show’, and said that “The opportunity for me to become a singer, is due to a dream after seeing TVXQ on TV.”

(T/N: Only TVXQ-related parts were translated)

The day before interview on the 19th Han Hyo Joo appeared at KBS2 ‘Hee Yeol sketchbook’ and performed a song on stage. “Due to cold, my throat was not in its best condition, so I was wondering if I sang well? Yet since everyone seemed to enjoy it, it was really fun.” she said.

In fact, Han Hyo Joo has a great interest in music, eventhough acting is her desire, yet she still works in music as a hobby and will participate in a coming fall music festival called Grand Mint Festival for two days on October 23 and 24.

“When I was young, I learned varieties instruments from violin, piano, to guitar. It started well but the problem is when I had to stop it” as she laughed.

Suddenly we now become curious about Han Hyo Joo’s music taste, in which Han Hyo Joo replied, “I like a lot of indie bands, mostly I’m into pop music.” she also mentioned, “Youngwoong Jaejoong (TVXQ) is one singing so good.” From TeleCinema ‘Heaven’s Postman’ where Youngwoong Jaejoong and his group TVXQ contributed in the movie’s soundtrack, she learned to actually appreciate the true worth of their music.

Then how about Lee Seung Gi who acts together with her in ‘Brilliant Legacy’? To this question Han Hyo Joo replied, “Seung Gi makes good music too.” in trembling voices that drew laughters.

In the end she revealed, “I don’t have quite skill in producing my own music, but if there’s a chance, I want to stand and play for musical stage.”

JYJ is attempting to break a new record for album sales.

JYJ will be releasing their first global album on October 12th. As the team is comprised of former TVXQ members Micky Yoochun, YoungWoong Jaejoong and Xiah Junsu, many predict that this album will have a great impact on the music industry.

TVXQ, which the three members were a part of, set a new milestone for album sales when they sold 500,000 copies of their fouth album . It left a deep impression on the industry as at the time, the offline album market was in a deep slump.

is predicted to have an explosive reaction as it is the first album in two years that the trio are releasing. All 99,999 luxury package limited edition CDs have been pre-ordered which means that the trio has sold 100,000 copies in a single day. To add to the industry’s surprise, 50,000 copies of the normal package have already been pre-ordered as well, two weeks before the release of the album.

One of the reasons the album is garnering such attention is because it will be released worldwide. As their former group TVXQ even made it in the Guinness Book of World Records for having the biggest official fanclub in the world, many predict that the number of albums sold across the continents will be impressive. As bulk orders are being made from countries such as Japan and China, some are even speculating that they will sell over 500,000 copies and surpass their former record.

A representative of Warner Music stated, “The fans’ anticipation is high because this is their first album in two years. We are cautiously predicting record breaking album sales.”

Tohoshinki’s mega popular song “Doushite Kimi Wo Suki Ni Natte Shimattan Darou?” will be included in a song drama! Emphasizing heavily on the expressions of the world and pure love behind the lyrics, the song left us with a deep impression. This is a song that will always remain in our memories as we can’t help but be immersed into the lyrics.

With the theme revolving around pure love, the scenes of lyrics that the main female and male characters will be interpreting is going to be included in the CD, thus naming it as a “Song Drama”. This will be mainly aimed towards female consumers who view the world’s theme on love.

“Doushite Kimi Wo Suki Ni Natte Shimattan Darou?”
(Why Did I Fall In Love With You?)
Tohoshinki
Other included songs have yet to be confirmed
Form: CD
Price: 3150 Yen
Projected date of release: September 29 2010 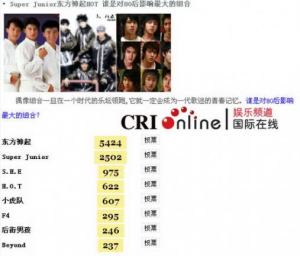 Once idol groups lead the music industry in their generation, they will always become a part of the fond youthful memories of fans. From The Beatles to The Little Tigers, every generation will have their own idols, so which group influences people born in the 80′s the most?

Through the international online entertainment channel’s related survey’s, the group at the number one spot is still Korea’s representative idol group – TVXQ. Not being affected by the members’ dispute with their management company, TVXQ’s popularity is still as explosive as ever.

Super Junior follows in the 2nd place, so did Hankyung’s withdrawal from SJ make an impact on the ranking? The classic group of Super Junior will always be in the memories of everyone around.

Taiwan girl group S.H.E took 3rd place. Having been in the industry for 10 years, anyone would be able to hum at least a few lines of their songs.

Next in line is H.O.T. Although they have disbanded for a few years already, the impact that they had on everybody is still fresh in our minds.

[TRANS] 100913 The Province Where Idol Stars Come The Most From?

Which place is the place where the South Korean stars have come from the most?

On Mnet ‘MCountdown MDC News’ they revealed where the recently known stars were born.

On the past 9th in the broadcast of MCD NEWS if you follow it, Busan is the place where most of the stars were born. Supreme Team’s Simon D, CNBlue’s Jung Yong Hwa, After School’s Lizzy but also 2NE1′s Sandara Park and MBLAQ’s Thunder who have grown up in the Philippines are also from Busan.

A lot of stars also came from Gwangjoo like Busan: DBSK’s U-Know Yunho, Big Bang’s Seungri, KARA’s Goo Hara, 2NE1′s Gong Minzy etc… Seungri was especially known in his place before debut for his dancing skills.
There are also eye catching stars in the Daegu and Jeonju place. In broadcasts there is 2PM’s Junsu and SHINee’s KEY who uses their hometown dialects and we can see that they are from the Jeonju province.

SNSD’s Taeyeon and Rainbow’s Noeul are also from the Jeonju province, they were friends since primary school.

Out of this, MBLAQ’s Mir is from Jeonnam Jangsung, DBSK’s Hero Jaejoong is from GongJu, Super Junior’s heechul who has an eye catching Western European appearance is from the Kangwondo province.